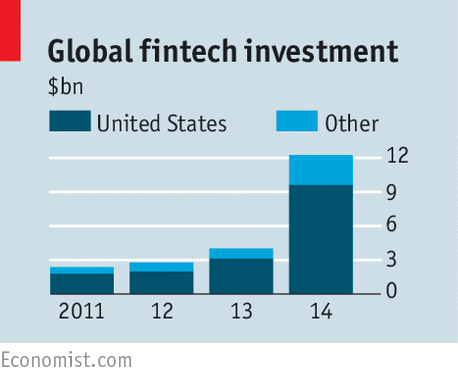 IN THE years since the crash of 2007-08, policymakers have concentrated on making finance safer. Regulators have stuffed the banks with capital and turned compliance from a back-office job into a corner-office one. Away from the regulatory spotlight, another revolution is under way—one that promises not just to make finance more secure for taxpayers, but also better for another neglected constituency: its customers.

Get our daily newsletter

Upgrade your inbox and get our Daily Dispatch and Editor’s Picks.

The magical combination of geeks in T-shirts and venture capital that has disrupted other industries has put financial services in its sights. From payments to wealth management, from peer-to-peer lending to crowdfunding, a new generation of startups is taking aim at the heart of the industry—and a pot of revenues that Goldman Sachs estimates is worth $4.7 trillion. Like other disrupters from Silicon Valley, “fintech” firms are growing fast. They attracted $12 billion of investment in 2014, up from $4 billion the year before. Many of these businesses are long past the experimental phase, as our special report this week explains. Lending Club and OnDeck, two new lenders, have gone public; users of Venmo, a payments app, transferred $1.3 billion last quarter. In his latest annual letter to shareholders Jamie Dimon, the boss of JPMorgan Chase, warned that “Silicon Valley is coming.”

The fintech firms are not about to kill off traditional banks. The upstarts are still tiny: Lending Club has arranged $9 billion in loans through its marketplace, small change compared with $885 billion of total credit-card debt in America. They have yet to be properly tested in a downturn. No fintech product comes close to matching the convenience and security of a current account at a bank. And banks will gain from many of the innovations. Square, for instance, is a system that makes it easier for small businesses to take card payments; it will boost banks’ transaction volumes. Nonetheless, the fintech revolution will reshape finance—and improve it—in three fundamental ways.

First, the fintech disrupters will cut costs and improve the quality of financial services. They are unburdened by regulators, legacy IT systems, branch networks—or the need to protect existing businesses. Lending Club’s ongoing expenses as a share of its outstanding loan balance is about 2%; the equivalent for conventional lenders is 5-7%. That means it can offer better deals to the borrowers and lenders who congregate on its platform. Half of the loan applications Funding Circle gets from small businesses arrive outside normal business hours. TransferWise takes a machete to the hefty fees that banks levy to send money across borders.

Second, the insurgents have clever new ways of assessing risk. The likes of Kabbage and OnDeck hoover up information, on everything from social-media reviews to companies’ usage of logistics firms, to assess how well small businesses are doing. Avant uses machine learning to underwrite consumers whose credit scores were damaged during the financial crisis. Kickstarter uses the wisdom of crowds to finance startups.

This kind of data-driven lending has clear advantages over decisions based on a single credit score or meetings between banker and client. Humans are more prejudiced than algorithms: Italian banks charge female owners of small businesses more than male owners, even though the women have lower failure rates. The cost of relationship lending encourages bankers to chase big customers rather than small ones. For young businesses and borrowers on the fringes of the banking system, risk assessment that scours the online world for information is better than a loan officer in a branch.

Third, the fintech newcomers will create a more diverse, and hence stable, credit landscape. The business of internet-based firms is less geographically concentrated than that of bricks-and-mortar lenders: small American banks already use lending platforms to diversify their own portfolios. More important, the fintech firms avoid the two basic risks inherent in banking: mismatched maturities and leverage. Banks take in short-term liabilities such as deposits and turn them into long-term assets such as mortgages. Fintech lenders like Lending Club, Prosper and Zopa simply match borrowers and savers directly. Banks borrow heavily to fund lending; the new platforms do not. Instead, a lender commits its money until the final payment is due and it bears the risk of default.

The lithe and the lumbering

If fintech platforms were ever to become the main sources of capital for households and firms, the established industry would be transformed into something akin to “narrow banking”. Traditional banks would take deposits and hold only safe, liquid assets, while fintech platforms matched borrowers and savers. Economies would operate with much less leverage than today. But long before then, upstarts will force banks to accept lower margins. Conventional lenders will charge more for the services that the newcomers cannot easily replicate, including the payments infrastructure and the provision of an insured current account. The bigger effect from the fintech revolution will be to force flabby incumbents to cut costs and improve the quality of their service. That will change finance as profoundly as any regulator has.