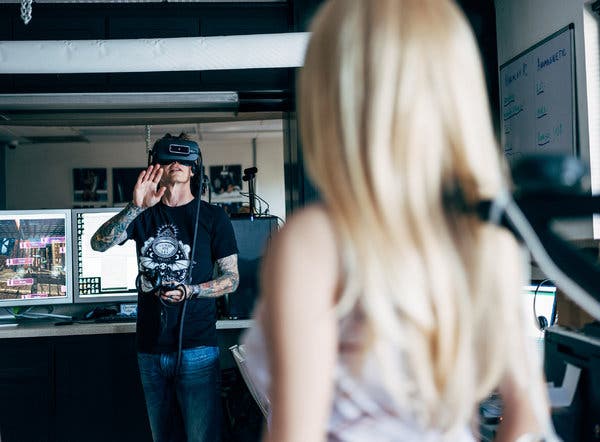 Matt McMullen in the virtual reality lab at his company, Realbotix.Credit…Graham Walzer for The New York Times

In early 2014 Ela Darling, 31, a pornographic actress, recorded her first virtual reality sex scene. She was in a college dorm room at the University of Maryland dressed in an R2-D2 swimsuit and high athletic socks. She sat on a twin bed, next to a wooden desk, and spoke to the camera as if it were a real person. There was no story line and no other actors.

This time, though, was different. Virtual reality uses many camera lenses to record the same scene from hundreds of angles. When the takes are stitched together, the viewer gets a 180- or 240-degree view of the room and the feeling that he or she is there, participating. As soon as Ms. Darling viewed the scene she recorded, she knew virtual reality would be a sea change to her job and the adult-entertainment industry.

“You can pretend like you are in the bedroom with me, and it is someone you have a crush on,” she said. “You are in the experience.”

By 2025 pornography will be the third-largest VR sector, according to estimates prepared by Piper Jaffray, an investment and management firm. Only video games and N.F.L.-related content will be larger, it predicted, and the market will be worth $1 billion.

“We’re getting more and more of it every day,” said Mark Kernes, a senior editor at AVN Media Network, which covers the industry. “We are leading the technology in this area. Sex sells, and where there is money to be made, there will be entrepreneurs who want to adopt it and make money from it,” some by offering it for free to increase clicks.

Headsets Are Just the Beginning

Ms. Darling first experienced regular old VR at E3, a conference for the video-game industry. Excited by the pornography possibilities, she found a college student on Reddit who knew the technology but lacked a star. Before long, Ms. Darling started streaming weekly VR segments live from her bedroom in Los Angeles.

She was one of the first VR webcam women, according to Mr. Kernes. She then started a company named VRTube.xxx to make the technology, now licensed to Cam4.com, which employs over 40 performers.

Though the pornography industry as a whole is challenging to regulate, considering the potential for abuse, disease and exploitation, the virtual kind comes with extra moral and maybe legal issues. For example, can you use someone’s likeness to have sex with them in virtual reality?

“Virtual reality is like the Wild Wild West,” said Bryony Cole, the host of “Future of Sex,” a podcast that explores technology and sexuality.

At this year’s AVN Adult Entertainment Expo, a convention and trade show held each January in Las Vegas, the latest advancements in virtual reality pornography were on display.

CamSoda, a website that specializes in live sex videos, had an exhibit featuring pornography stars dressed in plunging bathing suits and waving visitors into the booth. They were showing off OhRama, a small canister that attaches to virtual reality headsets and releases scent during the action. “Believe it or not, the scents were created by the girls,” said Mr. Kernes, who was there. “It’s sweet and musty. They know what they like.”

There are also companies that are adding taste and touch to the experience.

Another big player is CamasutraVR, a start-up using 142 cameras that all look at one person, or one body part. “They are creating images from that, which they are hoping will be indistinguishable from an actual person,” Mr. Kernes said. “I’m sure those people wished they had been using that VR system at home.”

One of the most buzzed-about inventions has been the sex robot. The first one, Harmony, was introduced in May by a company named Realbotix. In seductive videos posted on YouTube, Harmony shows off her long legs, her firm breasts, her full lips, her lifelike hand gestures, even her intellect.

“How do you feel about sex?” an unknown presenter asks her in one video.

“Sex is one of the most fascinating things in the world,” she responds in a raspy voice. “I don’t see anything wrong with it.” Harmony can connect with virtual reality so the user can interact with her in that space; she can perform all the acts the viewer is watching.

“It’s a little bit of a video game combined with sci-fi,” said Matt McMullen, the C.E.O. and creative director of Realbotix. The company has been making dolls for 20 years that were linked to artificial intelligence but not virtual reality. “Based on our experiences with thousands of clients,” Mr. McMullen said, “people do use them for sex, but there is something more that exists. We focus on companionship.”

Virtual reality has been nicknamed the empathy machine because it allows people to feel like they are truly connected to the action. “It’s neurological,” said Holly Richmond, a somatic psychologist based in Los Angeles and Portland, Ore. “You aren’t just watching and thinking about it. You are feeling it, and it’s not just your genitals. There is literally a mind-body connection.”

When Ms. Darling does live X-rated performances, users can leave comments and chat to one another on the side of the screen. “The people who are in virtual reality tell the other people watching me in 2-D to stop being jerks and knock it off,” she said. “They feel like they know me and are in the bedroom with me.”

Many sex therapists and educators are interested in the new technology, just as a dentist might be with the latest plaque-detection gizmos. Ms. Richmond worked with BaDoinkVR, a virtual-reality company in Rochester, N.Y., to create Virtual Sexology, a series of free videos that help men and women overcome common sex problems.

A recent video, updated in June, takes women into the bedroom where they see how one blond, busty woman arouses herself before sex. She sits in front of her partner massaging her arms, her legs, her breasts. As her breathing heats up, a voice-over says that some women need to be physically touched before feeling any desire for sex. The first video, aimed at men, was the most downloaded video on BaDoinkVR.com in 2016 — an impressive feat considering it was competing with noneducational pornography.

Ms. Cole, the podcast host, is most excited about how virtual reality can be used in sex education.

“What if we had young people watch videos where they practice consent or practice identifying at-risk behaviors?” she said. “Or they can be in a room with someone who said, ‘I contacted herpes and this is my experience.’ That is way more informative than a gonorrhea slide.”

Barbara Rothbaum, a professor in the department of psychiatry and behavioral sciences at Emory University School of Medicine and the director of Emory’s Veterans Program, is studying how virtual reality can help treat people suffering from post-traumatic stress disorder caused by military sexual trauma.

The program is building scenes that take victims to barracks, tents, private living quarters, latrines, offices or remote buildings and vehicles, where the trauma may have taken place. The idea is that going back to these places virtually will help victims confront their memories so they can move forward with more internal peace.

But for virtual reality to work, the scenes have to be so lifelike that users get lost in them and take them for reality. They have to feel like they are participants, not just observers. “We can create 3-D bodies in virtual reality and do whatever we want with them,” Ms. Cole said. As the technology becomes good enough to make that happen, issues are bound to arise.

Mr. McMullen said an issue his company has is clients commissioning dolls that look exactly like people they know in real life, maybe an ex-girlfriend they never got over or someone about whom they fantasize. His company requires written consent from the model for his or her likeness to be used.

She is worried about the technology assimilating into the culture as easily as dating apps, drawing people away from flesh-and-blood encounters.

Certainly partners will also have to negotiate whether virtual-reality sex constitutes cheating. It is, after all, much more lifelike than traditional pornography.

But Mr. McMullen said a lot of people accuse his sex robot of doing that, but he believes he is helping alleviate a bad situation, not causing it. “There are people who are already lonely, and people who live their lives being alone. They work all day and come home to an empty house,” he said. “This is just offering an alternative to those types of people. They don’t have anyone else.”