HENDERSON, Nev. — The signs of Nevada’s resurgent economy are everywhere in this community outside Las Vegas, the fastest-growing city in one of the country’s fastest-growing states.

New housing developments are spilling up the mountainsides, filled with families and retirees fleeing California and the East Coast for sunshine, cheaper land and lower taxes. Warehouses are sprouting beside a huge new practice facility for the Las Vegas Raiders football team — another set of California transplants. Even the names on new apartments and Spanish-tiled subdivisions mirror the optimism of a state on a hot streak after years of a plodding economic recovery: Elysian. Inspirada.

“It’s a boomtown,” said Ivonne Hernandez, 28, who was in high school when her family lost their home in the housing crash.

But Ms. Hernandez and other middle-class voters say they are not sharing in Nevada’s jackpot. As the state handed out millions in tax incentives to lure businesses here, working-class voters say they are struggling to keep up with rising rents and still feel economically vulnerable more than a decade after the recession plunged Las Vegas’s tourism and construction-dependent economy into disarray.

Today, Ms. Hernandez has a good-paying job at a gas company, but said she has been unable to afford an apartment of her own. She has already voted early for Senator Bernie Sanders ahead of Saturday’s Democratic caucuses. “There’s just not opportunity out here for me.”

Nikki Peters, who markets time shares in Henderson, said that despite the booming economy, her family struggles. She and her husband voted early for Mr. Sanders this weekend because they feel he cares about people like them.

“It’s not better,” said Ms. Peters. “We can’t afford to take vacations. We can only pay bills.”

Nevada lagged in recovering from the chasm of the recession, but it is now growing at a faster clip than much of the country. In southern Nevada, median home prices have increased by 40 percent to $305,000, according to the Las Vegas Realtors group, and builders now complain they cannot find enough workers. 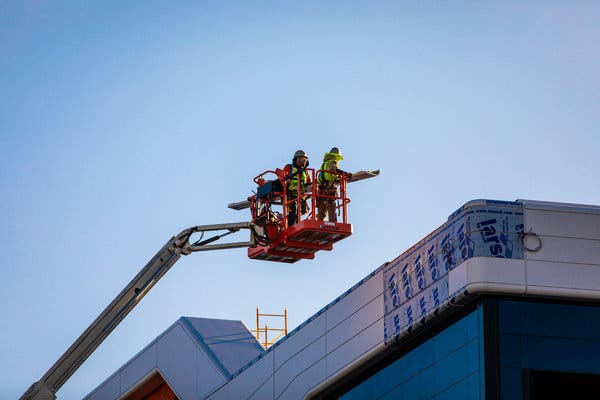 The Las Vegas Raiders are building their new headquarters in Henderson.ImageThe promise of a fresh start in a growing economy coaxed Rita Story to move to Las Vegas.ImageIvonne Hernandez, center, with her mother, Ivette Carranza, and Jose Martinez, her stepfather, says Las Vegas is a “boomtown.”

As new neighborhoods sprawl into the creosote desert, local officials here in Clark County have begun warning they are running out of space, and have proposed opening new federal lands to development. In Reno, a flood of newcomers from the Bay Area and companies including the electric-car maker Tesla have set off a runaway spree of growth.

To President Trump’s supporters, Nevada’s growth has become the strongest argument for his re-election. Housing prices have rebounded. Marquee projects like a $4 billion Resorts World development and the Raiders’ onyx-black stadium are reshaping the Vegas skyline.

Victoria Seaman, a Republican Las Vegas councilwoman, lauds the president for it all. She recently wrote an op-ed declaring that Nevada was the beneficiary of a “blue-collar boom” driven by Mr. Trump’s tax cuts and trade policies. Over the past six months, 500 new businesses have opened in her ward on the west side of the city.

“I don’t think he gets enough credit,” Ms. Seaman said in her seventh-floor city offices overlooking a jumble of half-built buildings, shortly before she dashed off for a security screening to meet Mr. Trump as he made a campaign swing through Las Vegas.

Henderson, the second-largest city in Nevada, with 316,000 residents, cultivates an image as Vegas’s genial kid sibling, a spread of subdivisions, golf courses and master-planned communities knit together by the decidedly un-Sin City slogan, “A Place to Call Home.”

It is whiter than the rest of Nevada, which is nearly 30 percent Latino and 10 percent black, but local officials and demographers say waves of new arrivals are transforming it into a more diverse suburb with an increasing number of foreign-born residents.

“There was a lot of empty real estate here for many years after the recession,” said Scott Muelrath, chief executive of Henderson’s Chamber of Commerce, as he drove down St. Rose Parkway. And now, “You can go two weeks and come down this street, and there’ll be something new going on.”

He passed just-opened big-box stores and bulldozers leveling the rocky ground for new shipping and distribution warehouses. Henderson, like the rest of Nevada, has tried to diversify its economy since the crash to make it less vulnerable to Nevada’s boom-and-bust cycles. Google has opened a data center, and plans are underway to build a machine-tool plant and a huge Amazon fulfillment center.

Of the more than 141,000 people who moved to Nevada in 2018, about 50,000 of them were from California, The Las Vegas Review-Journal reported, amplifying an eastward flow that goes back decades. Today, nearly a third of the eligible voters in Clark County, which contains about 70 percent of Nevada’s population, were born in California, said Robert Lang, the executive director of Brookings Mountain West. Only one in 10 is from Nevada.

Political analysts argue the recent surge in migration has helped Democrats solidify their control in Nevada. Democrats have about 110,000 more registered voters than Republicans, and have a powerful turnout machine in the unions that represent thousands of casino and hotel workers.

The culinary union, for instance, is particularly powerful because it represents many of the workers in Las Vegas’s casinos. Leaders of the group, which is over half Latino, have said they are opposed to Mr. Sanders’s single-payer plan.

“This is a very difficult state for any Republican to win statewide,” said Jon Ralston, the editor of The Nevada Independent.

But Nevada is also drawing people fed up with blue-state liberalism. Tamra West, 42, a real estate office manager, and her husband decided on a whim to sell their house in Riverside, Calif., and move to a rental in Henderson. Ms. West said Nevada’s low taxes hewed more to her conservative economic values.

Image“You can go two weeks and come down this street, and there’ll be something new going on,” said Scott Muelrath, president of Henderson’s Chamber of Commerce.ImageVictoria Seaman, a Republican Las Vegas councilwoman, lauds one person for the runaway growth: President Trump.

Though Ms. West’s husband is a registered Democrat, she said they are both solidly behind Mr. Trump’s re-election. As the Democratic candidates debated this week at the Paris resort, Ms. West said she worried that their economic policies would torpedo the housing market by raising interest rates and taxes.

“Democrats are not pro-business,” she said.

Nevada’s growth is at the heart of Ms. Hernandez’s job. She coordinates natural-gas hookups for the new businesses that have helped lift job growth here to an annual rate of 2.5 percent since the end of 2016, a full percentage point higher than the national average, according to the Bureau of Labor Statistics.

After working as a contractor for two years, she celebrated getting hired full time last year by renting her first apartment. It was more than a milestone: Her parents lost their home and declared bankruptcy during the crash. She lost her college scholarship in Nevada after she and her family relocated to Utah looking for construction work for her stepfather.

Ms. Hernandez loved the one-bedroom apartment she found in Henderson, but said she could not cope with the $1,468 she paid on rent, utilities and internet. Rents across Nevada have increased about 15 percent since 2016, about double the national average, according to Zillow. Ms. Hernandez moved out a month ago and is now living with her boyfriend’s mother.

“It feels like you can’t catch up,” she said.

With the national economy growing and unemployment at 3.6 percent — slightly lower than Nevada’s rate of 3.8 percent — the fight to frame the economy is an election-year battlefield.

Mr. Trump boasts about a “great American comeback” while the Democratic candidates hoping to replace him focus on slow wage growth, soaring student debt and a chasm between the rich and everybody else.

Adjusted for inflation, Nevada’s median household income of $61,864 is still about $4,000 less than families earned before the recession. The lagging pace of wage growth has sharpened debates about whether Nevada’s boom-and-bust economy is growing sustainably this time, or building another bubble that will hurt the poorest when it bursts.

When Rita Story, 61, lost her telecom job in 2018, she said that family and the promise of a fresh start in a growing economy pulled her to move from Indiana to Las Vegas with her 24-year-old daughter.

There is plenty of work, but Ms. Story said they have struggled to find anything full time. She is earning $13 an hour doing tax-season work at an accounting office, and her daughter works part-time retail shifts. They are sleeping on a rollout bed and couch in her sister’s home, and hoping that a Democratic president will lift their wages and lower their $500 monthly health care costs.

“That’s my No. 1 — jobs that pay you enough,” Ms. Story said as she waited in line to vote early for the California businessman Tom Steyer in the caucuses this week. “I’m starting over. I thought it might have been better.”